Gåsören is the club harbour of the Skellefteå division of SXK (The Swedish Cruising Club) at the old pilot and lighthouse station. 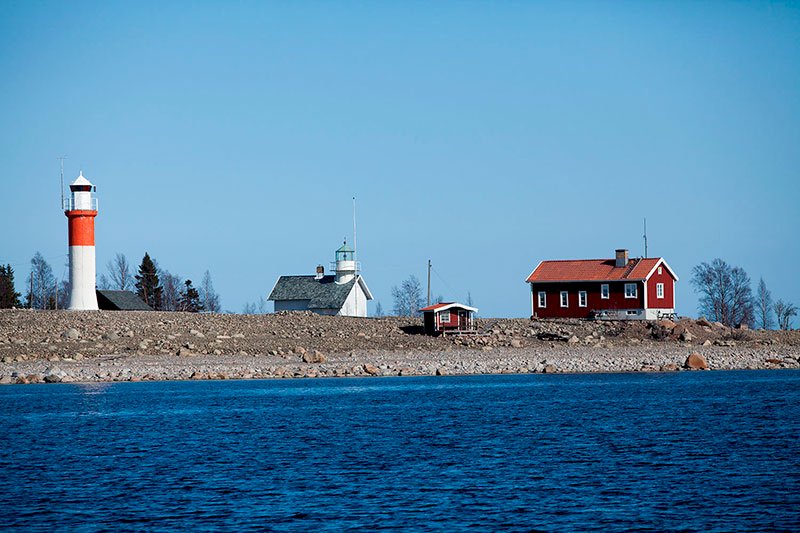 When you come from the large main waterway in to the waterway to Kurjoviken, you will have Gåsören on your starboard side. Once you reach the red buoy with topmark, proceed on course 352o to come in to the little natural harbour. You have deep water in to the harbour.

It was around the beginning of the 20th century that the Swedish coast first became fully equipped with lighthouses. Before the lighthouses existed, ships often sought a night harbour where they could wait until the dawn arrived. Sailing at night time was associated with grave danger, since it was not possible to see reefs and low skerries.

Gåsören also became a pilot station in 1904, and a pilot attendants’ building was built for the staff. To begin with they worked with simple but proven means. In order to show that a ship could receive a pilot, the pilot ball – a black steel ball – was hoisted on a high mast. A new and automated concrete lighthouse was built in 1921, and the old lighthouse was put out of commission. The light device was disassembled, and the building was taken over by the pilots, but in 1968 the pilot station was also closed down. But Gåsören has now had new life breathed into it! The lighthouse cabin and the pilots’ cabin is owned by Svenska Kryssarklubben (SXK, the Swedish Cruising Club), which allows boating guests to use the pilots’ house. And as the icing on the cake, Gåsören’s lighthouse apparatus was returned in 2003.

Here you reach the club facility’s jetty directly from the large waterway that passes...