Its varied nature makes the island a very attractive resting and nesting location for a number of birds, and a total of more than 200 species of bird have been spotted on the island at some time. The numerous shallow bays represent popular locations for waders and ducks. 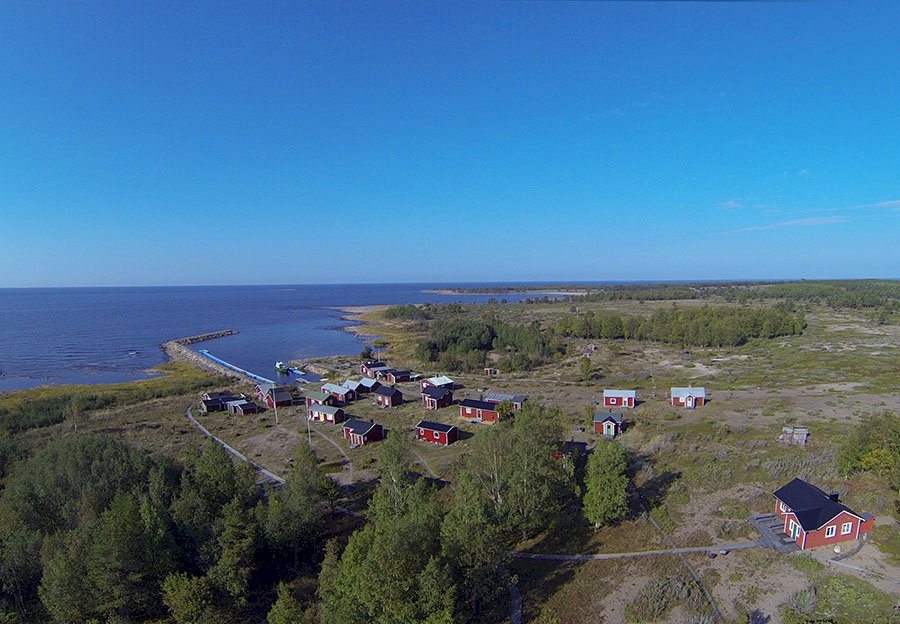 Sail in between Korkea and Kajava. Set a course 190o for 1.3 M. Keep an eye out for fixed fishing nets. When you have passed the flag, set course 247o just south of Malören. Maintain that course until Gunnaren is totally free from Sandskär’s western point. Set course 325o in the direction of Gunnaren, and hold that course until the approach leading line markers are in line at 022o. About 40 m before the pier, you should leave the leading line and stay 3-4 m west of the leading line. Round the pier between the leading line and the shore. If westerly winds are blowing, a good place to be is the eastern shore at Sandskär’s northern point.

History
Considered by many to be our most naturally beautiful island, with high, wide sand dunes that have formed a “stadium”, an abundant forest of aspen trees, the green steppe, the sandy beaches, and the many reminders of an old fishing village. There have previously been two fishing villages on the island, Kumpula and Ruuti.
These days only Kumpula remains. The island is relatively rectangular in shape, apart from an approx. 3 km long sandbar, Nordrevet, on the north side of the island.
The chapel on Sandskär is a grain magazine from 1816 that was later moved to the chapel’s present location. Next to the chapel there is a cemetery with three or four headstones. One grave appeared during October, 1886 when the brig “Elvine” sank and 20-year-old Olov Andersson from Öland lost his life. You can read more about this tragic accident in the chapel on the island.
Sandskär is composed of sand superimposed on moraine. The beaches are shallow and sandy. The seabed around the island is constantly exposed, and the bottom sand dries and is blown up onto land, giving rise to the numerous sand dunes that characterise the island. Some of these dunes are of impressive size, for example the western and eastern stadium that is formed by dune masses around hollowed-out burrow bottoms. Sandbanks of shingle have been exposed at places where the sand has eroded.
The island’s varied nature has given rise to a rich and distinctive flora. Heath, pine forest, birch forest and abundant aspen forest are all to be found on the island. If you are in luck and come here around midsummer time, you might even be able to experience flowery meadows filled with lily-of-the-valley and orchids.
You might also be lucky enough to find the local variety of wormwood (Artemisia campestris ssp. bottnica), which is an endemic plant that only grows in the Bay of Bothnia and nowhere else in the entire world! Local attractions include the wide-ranging sandy beaches, the exotic dune-filled landscape and an interesting plant and animal life.
Travel tips: the islands are difficult to approach in the shallow water. Larger boats can put to at Nordrevet, from where a boarded path leads to the fishing village of Kumpula. At the harbour you will find information, cabins, a tent site, a sauna and an outhouse toilet.
In order to protect the birdlife, it is forbidden to go ashore on certain islands during the period 1 May – 31 July. In order to reach the harbour on the south-western side, whose entrance is marked by leading line markers, choose the eastern side of the island for your approach.

Luleå’s own sea bath. A tour boat runs here from and to the city on a daily basis...

As early as the 18th century, people in Europe had learnt how to make porcelain...