If you want to visit the township of Haparanda, you can take the bus – and leave your boat in safe keeping, since the harbour is guarded. 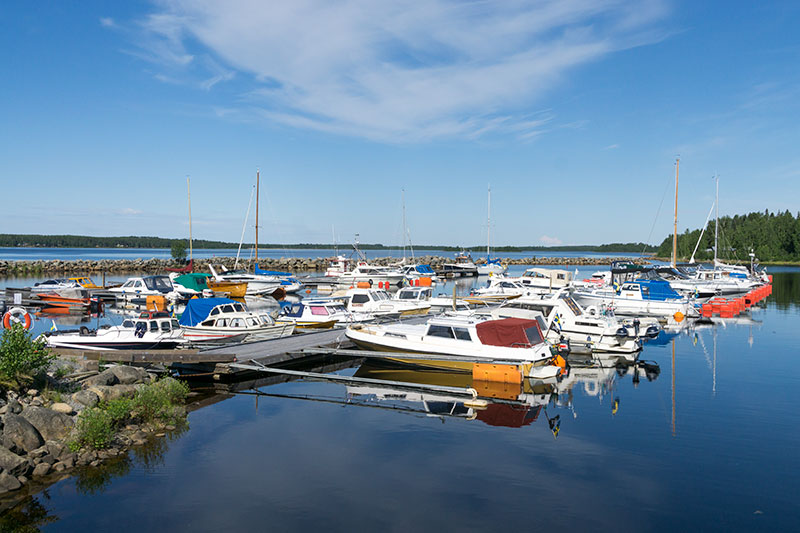 After Sweden’s last war, against Russia in 1809, it was decided to build a new town since Torneå had been lost to the Russians. The new town was to be located on “Öystinkenttä”, and was to be named after the king at the time, King Carl Johan Bernadotte. In terms of its population, Carl Johan’s Town was never a great success. Where Hillerström and others were once making their new homes, there is now a holiday cottage area, where a couple of hundred guests spend their summers.
One of the reasons for wanting to build a new town in the area was to have access to water that was deep enough for a harbour. Shipping traffic in those days was much busier than it is now, since the transportation of staple goods and cargo most often went by sea. The choice of harbour eventually fell on the village of Salmis, which is located closer to Haparanda. But that harbour was wrecked by a storm in 1930, and because the land elevation had made the harbour shallow, a decision was made to move Haparanda’s outgoing harbour to Nikkala, the original location for the purpose. Consequently, Haparanda Harbour was built from 1931 to 1934 and was the municipality’s outgoing harbour for more than 30 years, at which time the shipping traffic was closed down for good.

Haparanda Harbour is presently the municipality’s largest marina, and is used by a large number of boaters and caravan owners during the summer months. Here you will find a service facility in the old Harbour Captain’s cabin, with a fully equipped kitchen, sauna and laundry. There is also a barbeque cabin, barbeque area, wood-burning sauna and toilets. At the far end of the pier, in the old harbour warehouse, the local village association has set up a museum based on the theme of the village’s fishing history. Here you can also find parts of our boat-building history, which has also made the village well known. Wooden boats as well as plastic boats have been manufactured in the village.

Discover The islands of Swedish Lapland

Antnäs Börstskär is visible when you look out towards the outermost islands. For...

Welcome to the bright coast!

The islands of the Bay of Bothnia are in many ways different to other coastal areas...