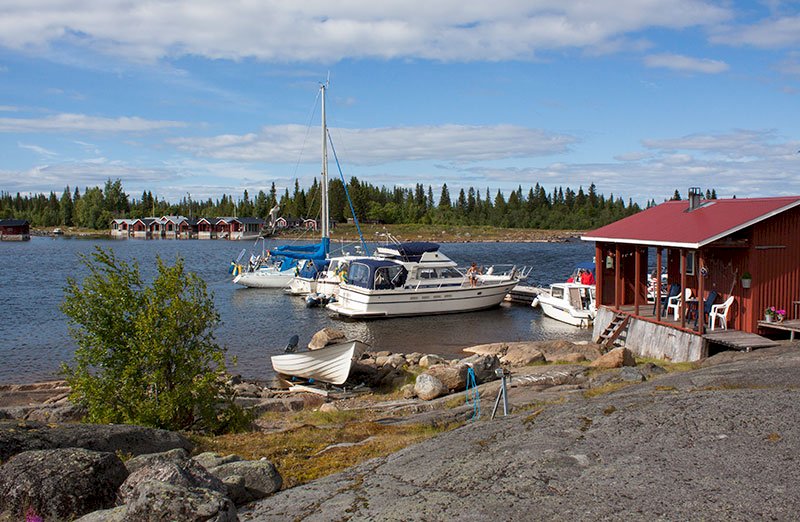 Old fishing village, island chapel, beach suitable for swimming, walking tracks and tour boat.
There is a cabin for rent; bookings can be made online at www.lulea.se or by contacting Luleå Tourist Centre. A further 3 cabins for rent are planned for construction in 2012.

The fishing village can be reached from two directions. The easiest way is to come in from the east. Head for the white-painted marker on the rock, but look out for the visible reef at the entrance to the bay. Make sure to keep the buoy that marks the shallow’s southerly tip on your starboard side, especially if your boat sits low in the water. Round the point quite tightly on the port side. Once you are in the bay itself, you can choose a place to anchor or else put to at the public jetty which is to be found almost at the head of the bay. The jetty is a 35 m long floating jetty, and there are 15 guest berths (night harbour). The harbour has a depth of 2.5 – 4 m. In the bay you are sheltered from the majority of winds, with the exception of when the north-easterly wind freshens. In that case you can move your boat to the Uddskär part of the bay, as long as the boat does sits no deeper than 1 m. Take care not to put to at the boathouses without first asking the cabin owners for permission.

Uddskär’s northern bay, with Estersön on the opposite side, has a free route in and a purely sandy bottom. However, the bay does quickly become shallow. From the sea side it is important to look out for the salmon traps that are set out from the eastern Uddskär shore. Be aware of the Estersön reef that lies to the northeast of the entrance to the bay.
You can also enter the Estersön channel from the Hindersön side, northwest. This requires careful navigation because the waterway is narrow and shallow and contains a lot of rocks. Enter at the southern buoy, and you now have two leading line markers in line in the direction of Uddskär straight ahead. STOP! You can’t just proceed straight ahead. There are several leading lines that must be followed. When you see a leading line marker on the port side, you have a new leading line at approx. 045o towards Saxskäret. When you come to the red buoy, you have a new leading line in the stern that indicates the continuing journey towards the green buoy (starboard side). After that you can stay in the middle of the channel until you come to the bay. You proceed around Uddskäret and come to the southern buoy indicating the entrance to Brändöskär. This passage cannot be used by boats that require water deeper than 1.5 m. The guest harbour fee is 60 SEK. Harbour service includes: fresh water, outhouse toilet, waste disposal facilities and a sauna. Other items of interest: cabin to rent (contact Luleå Tourist Centre), old fishing village, island chapel, beach for swimming, walking tracks and tour boat.

When sailing into the bay we are met by artist Erik Marklund’s statue of Christ at Hällgrundet, which was constructed in 1957. In a certain light the statue is visible a long way out to sea as a white beacon calling travellers in to Brändöskär. The same artist has produced the altarpiece in the chapel. To this day there is an artist here, Ola Taube, who holds his exhibitions in his studio at Brändöskär.

It is said that Queen Kristina donated Brändöskär to the inhabitants of Norrbrändö, but there is no written evidence to substantiate this claim. Even though Brändöskär/Uddskär is no longer a fishing village in the old sense of the word, many cabin owners still have their roots in Brändön.

Fishing in the old times was strictly regulated, and those who broke the rules could be fined or even banished from the fishing village. A specially appointed harbourmaster with assistants (the harbour court) ensured that law and order was maintained. All fishing was strictly forbidden from 6 pm on Saturday afternoon until 6pm on Sunday, a tradition that was stringently observed.

Herring was the fish most commonly caught, and the catch would be taken up in nets. The herring caught was the village’s most important trading item, and it was sold salted in wooden barrels. Whitefish, grayling, salmon, pike, perch and ide were also caught, although mostly only for domestic requirements. The fish was sold in the town, although sailing trips were also made to Haparanda, Brahestad and Uleåborg. Brändöskär/Uddskär was the largest fishing village among the islands of Luleå and consisted of 30 boat teams in 1820.

In the old days, the fishing cabins were always open to everyone. It was an unwritten rule to always make sure there was dry wood, matches and, ideally, a little bit of salt and a length of candle when one left a cabin. The ownership of the cabins was often a very uncertain matter, and it was well into the 20th century before people started to lock the cabins and became more careful about who owned what.

The surface of Brändöskär is upland and consists mainly of rocks, washed moraine, stones and sand. One type of rock that is very typical of Uddskäret and Brändöskäret is Haparanda-monzonite. It is a beautiful type of rock with coarse crystals of white and black. On the majority of outcrops you can also see how the inland ice has smoothed the rock and formed glacial striations.

The exposed location influences the plant and animal life here. The landscape has the same barren characteristics one finds in the mountains, rocks with lichen and moss, moors with sparse vegetation, and trees that have been swept by the wind. But in the more sheltered environments you can find plants like lily-of-the-valley and lesser butterfly-orchid, while local rarities include triangle moonwort and northern moonwort.

On Uddskär the plant growth is denser, and a larger number of species can be found here. There are large areas of forest with pine, spruce, birch and aspen, as well as smaller and larger bog areas. Uddskär’s beaches, especially to the east, have the same barren beauty as Brändöskär.

Brändöskär is part of the Skärgård Trail, which is a hiking trail over islands and water. For the shorter sections of the trail, between islands that are close to each other, it is possible to borrow row boats to get from one island to the next. The Skärgård Trail starts at Kallax Airport and then proceeds over the Tjuvholm peninsula, Sandön, Likskär-Altappen, Hertsölandet, Hindersön, Strömmingsören and Brändöskär.

If you prefer sandy beaches and sea, Boviken’s Camping is the perfect choice for...

Ettans Båthamn is the most central and well-equipped marina in Luleå. The location...

Hindersön is one of the larger of the islands of Luleå, and is the only island north...

Malören is the Norrbotten coast’s outermost skerry, from which the mainland can...