Hindersön is one of the larger of the islands of Luleå, and is the only island north of Gräsö in Roslagen that has farming. 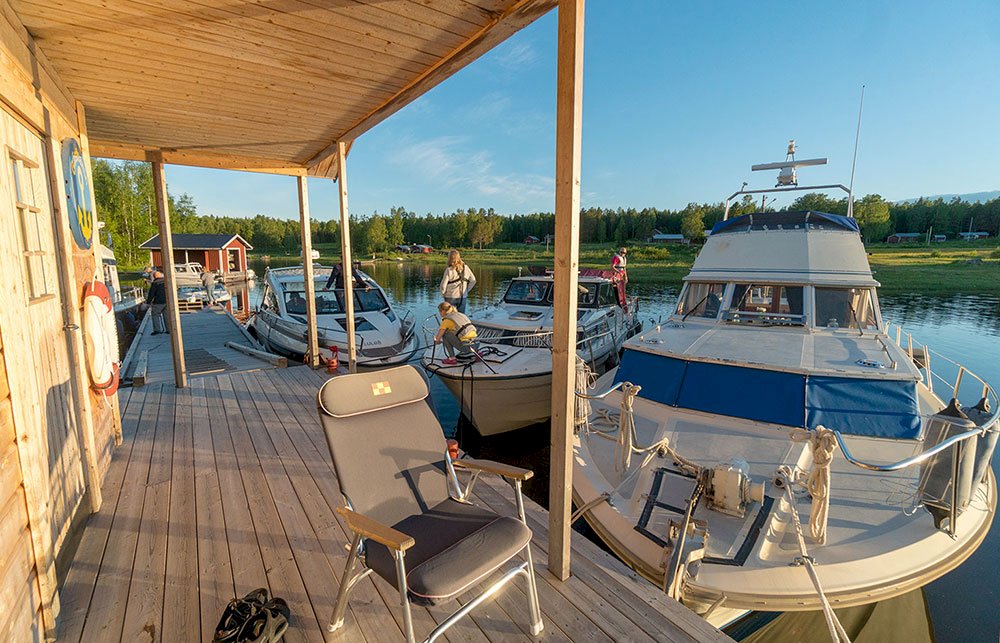 As early as the 16th century, people lived here who supported themselves by fishing, farming and seal hunting. As far back as the history of Hindersön can be traced, the island has been the most populated of all of Luleå’s islands, and it still is. The island had its largest population during the 1930s, when 148 persons lived here.

In order to reach the guest harbour at Ostisund, there is a marked waterway from the landing point. The approach is through an 8 metre wide dredged channel with a depth of 2.3 metres, after which you follow the leading lines. The harbour depth is 2 m. The harbour is well sheltered from all winds, and there are 10 guest berths. Mooring takes place at a floating jetty. The harbour is managed by the municipality of Luleå’s recreational department. There is a service facility at Jopikgården, a walk of 400 m, where there are 36 beds for rent. An outhouse toilet is located at the harbour.

The lovely natural harbour here is sheltered from all winds. There are two alternatives for the journey in the channel. Please note that the approach waterways have a minimum depth of 1.7 m at average tide. When you enter from the north between Lappön and Björkön, you should keep to the leading line in the direction of Björkön. You can then follow the marked waterway in to Norrisund.

If you are coming from the west, you can either sail between Kvinören and Skagsudden, or alternatively between Knivören and Lappön. If you sail between Knivören and Skagsudden, you will see the marked waterway that begins with two direction markers, north and west of the shallow. Sail between those two markers and you will find the marked waterway in the direction of Hannosviken on the port side. When you pass north of the shallow buoy along the waterway, hold about 180o in the direction of the gunpowder magazine on Oxgrundet. Even here the waterway is marked out by buoys set by the island inhabitants and lies on the northern side of Oxgrundet. Follow the line of buoys and, when it ends, you simply need to follow the leading line markers that exist on the southern part of the entrance. Once you are in the channel you will see the municipality of Luleå’s floating jetty with 10 guest berths. The harbour has a depth of 2 m. The harbour service is located at Jopikgården.

When you are in the bay between Degerön on the starboard side and Hindersön on the port side, you will pass the first pair of buoys on the port side (an eastern buoy and a western buoy that mark the entrance to Ostisund). You continue until you reach the next eastern buoy along with a southern buoy. Now travel between those two buoys, and you will see two leading line markers in line on the mainland straight ahead. Maintain this course until you pass a red buoy on the port side. Now you will come to the guest jetty as well as the tour boat jetty. There are 10 guest berths. Mooring takes place at the floating jetty. The harbour depth is approx. 3 m. The same thing applies here with regard to service – you will find the service facility at Jopikgården.

Iron ore was discovered on the island in 1842, and the mining of it has taken place during various periods. Apart from the mine, the gunpowder magazine is the only thing still left from that time, still at its original location on Oxgrundet in Norrisund. Limestone quarrying also took place, initially only to fulfil the domestic requirements, but later the limestone was quarried on an industrial scale when a lime kiln was built. The lime kiln still remains today, to the northeast of Hannosviken.

Hindersön has a wide array of flora ranging from strawberry, bramble and lily-of-the-valley to more rare varieties of plant such as the Siberian primrose, the Haploporus odorus fungus (“doftticka” in Swedish) and the ghost orchid. Hindersön is rich in forest, mostly blueberry spruce forest although there are also large populations of pine forest in sandy areas. The wildlife and birdlife common to the islands of the Bay of Bothnia are also to be found on this island, and there are plenty of hare as well as grouse and seabirds. Nesting osprey can also be found on the island.

Hindersön really consists of three smaller islands that have grown together on account of the land elevation. The northernmost part of Hindersön has retained its old name, Björkön, and the southernmost part is still called Gräsön.
The heart of the village is located between the four straits or bays, Ostisundet, Västisundet, Hannosviken and Norrisundet. The settlement is spread out over a large area.

Small sandy beaches can be found at, for example, the northern tip of Holmberget and in Hannosviken.

Conference centre – overnight accommodation
Jopikgården, a popular destination for excursions, is one of the few intact homes in the islands that mirrors life as it was in the old days. The guest house is a very lovingly restored, beautiful old Norrbotten farm that has been extended with a conference centre, restaurant, café etc.

Hindersön is part of the Skärgård Trail, which is a hiking trail over islands and water. For the shorter sections of the trail, between islands that are close to each other, it is possible to borrow row boats to get from one island to the next. The Skärgård Trail starts at Kallax Airport and then proceeds over the Tjuvholm peninsula, Sandön, Likskär-Altappen, Hertsölandet, Hindersön, Strömmingsören and Brändöskär.

If you want to visit the township of Haparanda, you can take the bus – and leave...

When you are at the northern marker at Tällögrundet, set your course for 180o. You...