This island is one of the larger islands in the region and has a small permanent population. A number of professional fishermen have their home harbour on this island. Junkön is first named in writings as early as 1491, at which time the island had barely raised itself from the sea. 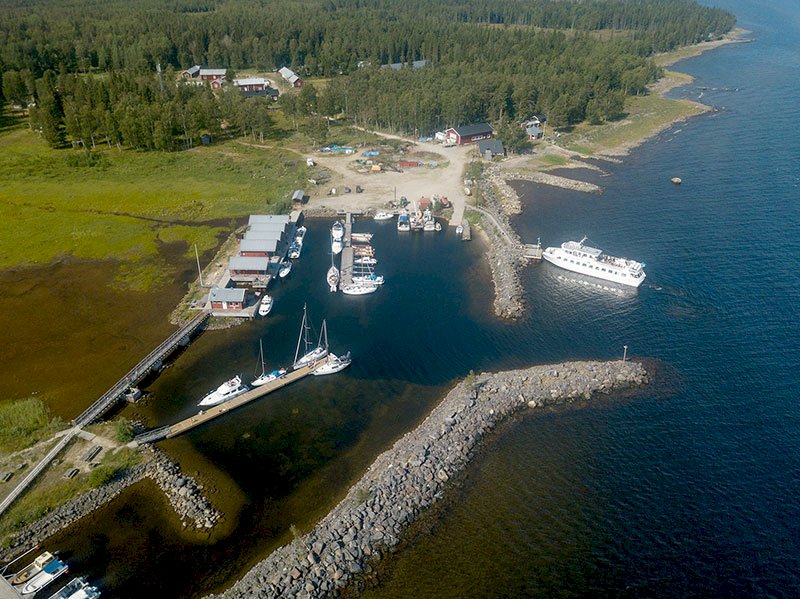 If you are coming from the north, you can proceed straight ahead towards the entrance after you have passed to the east of the Ålderman shallows. If you are coming from Västantillfjärden, you can sail fairly close to Junkön since the water is deep. Continue until you have the harbour entrance on your starboard side. Anchoring in accordance with the markings in the harbour. The harbour on Junkön is sheltered from all winds, although a northerly wind can be a bit troublesome if you are on the southern side of the harbour. There are ten guest berths in the fishing village, and the harbour depth is 2.5 m. Mooring occurs at a floating jetty and a fixed jetty. The harbour is under the management of the museum staff. Harbour fee: 80 SEK/day incl. shower. Electricity costs 20 SEK.
An island museum has been constructed here and you can gain access to WC, sauna, shower, electricity, fresh water, café (during peak season), refuse bin, trailer ramp and barbeque area.

It is said that the island is named after a Sami who grazed his reindeer on the island. His name was Junker and he is said to have lived under a large fir tree in the centre of the village of the time.

One thing well worth checking out on this island is the mystical windmill that is over 200 years old. The windmill was most likely built sometime around the end of the 18th century, although opinions are divided as to who built it. The mill has been used by the inhabitants of nearby islands for the grinding of barley and rye flour. The mill is very solidly built, and according to legend there were three possible builders responsible for its construction.
The first alternative – a seaman from Gotland or Öland became stranded on Junkön and built the mill. Another possibility is that a woman from Junkön married a man from the south with mill-building skills, and they built the mill together. The third alternative is that there is a tradition of building windmills in Ostrobothnia on the other side of the Bay of Bothnia, and a stranded fisherman or seaman from Finland is supposed to have built the mill during his stay on Junkön. The islanders deem this last-named alternative to be the most likely.

The village centre is a genuine and interesting island environment. “Junkön’s fishing village” was opened in the summer of 1998 with newly built old-style boathouses and an exhibition depicting what island life was like in the old days.
The boathouses, the exhibition and the new quay were constructed by the municipality of Luleå’s recreational department with support from EU. The new fishing village with harbour is an enjoyable and genuine island environment to which all boaters are welcome.

There are two cabins for rent on Junkön, located to the southeast of the island museum. Unlike other cabins for rent in the region, Junkön’s cabins have running water and electricity. The cabins can be booked at www.lulea.se or by contacting Luleå Tourist Centre.

Large parts of Junkön are part of a military shooting range to which access is not permitted.

Sail to the islands of Swedish Lapland

On these pages you will find information that will help you plan your sailing trip...