Rönnskär Island in the northernmost part of the municipality of Skellefteå you will find the lighthouse and pilot site Pite-Rönnskär – the name hints at the fact that it primarily served the waterway to Piteå. These days “Skäret” is only populated by people for recreational purposes. 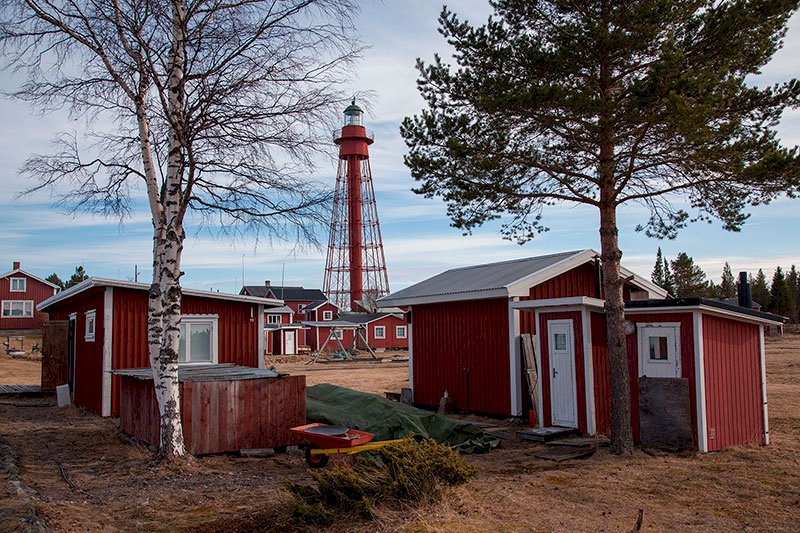 If you come from the north and pass Getbådan, continue on course 218o for about 3M. Now you are outside the entrance to the harbour. Navigate with the help of the nautical chart and local directions. If you come from the south, proceed on course 314o. If you check the nautical chart you will see that you are travelling along the waterway that runs between Hattgrundet and Olnilsgrundet. Follow the waterway until the entrance to the harbour, and then navigate according to the nautical chart and local directions. The guest harbour in the dredged basin is located on the northern side of the island. Guest berths at jetties can be found in the north-western part of the harbour. There are nice barbeque areas by the quay. Mooring occurs with anchor or alongside. The harbour is managed by Rönnskär’s harbour association.

For the last hundred years, the 39 metre high Heidenstam lighthouse, referred to as “Fyrarnas drottning” (“the Queen of the Lighthouses”), has dominated the landscape here. The lighthouse is no longer used since it has been replaced by Nygrån, but it remains as a reminder of Skäret’s heyday and still represents a fine navigational mark for seafarers on their way over the gulf of Skellefteå. The lighthouse, which is the only one of this type of construction still standing, has a grand history of its own. When visiting the island, make sure to ask the islanders about the possibility of taking in the breath-taking view from the full height of the lighthouse lantern.

There is a fishing chapel on Skäret which, according to the inscriptions on the outer wall, was constructed in 1771 by three brothers, whose initials are included in the inscription. The painting of the chapel, depicting the crucifixion of Jesus with Mary, Martha and Maria Magdalena, was carried out in 1780 by O.L. Sondell. The chapel’s bell dates from the 1840s.

The following myth relates to the island: “Deep into the spruce forest on the north-eastern part of the island there is a mythical rock called Klockstenen (“the Bell Rock”). It is said that every time the church bell rings to indicate a church service, this majestic moss-covered rock makes a quarter turn in a clockwise direction”.

The old buildings on the island have been refurbished by the local population, and visitors are always welcome.

The present day harbour is easy to access. Simply follow the leading line markers on your approach. The harbour has a guest jetty as well as anchoring for tour boats.

Despite being out of commission since 1971 and downgraded to “Tower” on the nautical chart, Rönnskär’s lighthouse is still a good navigational mark for boaters. The lighthouse was originally erected at Sandhammaren on the coast of Skåne in 1896, but was dismantled a few years later and reassembled at Rönnskär from 1904-1905. At that stage the lighthouse was made two levels higher and thus achieved a total height of 39 metres above the sea, making it Sweden’s second highest lighthouse after Långe Jan (“Tall John”) on Öland, and the highest of its type of construction. The lighthouse creates an interesting and maritime-like environment on Skäret.

In Jävre, which is located on the nearby mainland, you will find the Archaeology Trail, a pleasant hiking trail that follows in the footsteps of our forefathers.